This 21-acre upscale resort is next to a lake and is about a mile from the Walt Disney World Resort. The contemporary rooms and suites have separate living rooms and ..
Review for Disney's | Animal Kingdom by Scott
Rating:

I recently went to Animal Kingdom for the first time. I am a huge fan of Disney World but I was not overly impressed with the Animal Kingdom park. ..
Pros: Parking is easy, crowd level was good, food was good for a theme park and prices were reasonable.
Cons: Not a lot of animals, doesn't have a night time festival or light show and the themes for each land are a bit lacking.

Review for Earl of Sandwich by Noah
Rating:

Yes, THAT Morimoto, of Iron Chef fame. Absolutely everything I tried was delicious. The small plates are incredible, the duck ramen was so rich and the broth had an incredible ..
Review for Gideon's Bakehouse by Grayson
Rating:

The most amazing cookies! The peanut butter crunch is my personal favorite but you can't go wrong with any of them! 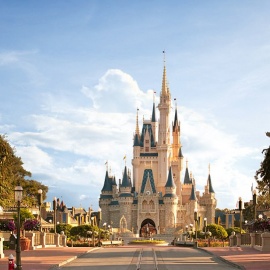 Hotels & Things to Do in Disney World View All

Nightlife in Disney World View All

Restaurants in Disney World View All

Shopping in Disney World View All

As one of the largest, most visited amusement parks in the world, Walt Disney World Orlando offers four amazing theme parks, as well as two outstanding water parks. "Magic Kingdom" was the first park to open in Walt Disney World Orlando's original theme park in 1971. The 107-acre "Magic Kingdom" is comprised of 7 "lands", including "Fantasyland" and "Adventureland." Also in this original theme park are "Frontierland", "Libertyland", "Tomorrowland", and "Mickey's Toontown Fair". Walk through the famed "Cinderella's Castle" for a glimpse of Cinderella herself! The renowned "Epcot Center" is made up of two fun-filled areas. "World Nation" represents 11 nations and cultures, while "Future World" is focused on the imagination and possibilities of the technological future. Be sure to be at Epcot Center at night, when the spectacular fireworks and laser show light up the skies over the World Showcase Lagoon! Walt Disney World's "Hollywood Studio", dedicated to the film industry, includes such attractions as "Echo Lake", "Pixar Place", and "Mickey Boulevard". Four other themed attractions also make up the adventurous fun in ?Hollywood Studio?. Disney's "Animal Kingdom" is an adventurous safari themed action-adventure park including "Camp Minnie-Mickey", "Africa", "Asia", "Discovery Land", and "Dinoland USA". After visiting these four amazing theme parks, you will want to be sure to experience the thrills and relaxation available to all in Walt Disney World's two water parks, "Blizzard Beach" and "Typhoon Lagoon", where fun is a family word!

Where To Kayak in Orlando | Rent A Canoe, Kayak, or Paddleboard

If you love to take a kayak in Orlando out on a lake, river, or through a canal, we've got the best spots for you. These canoe and kayak rentals in Orlando, as well

If you're looking for the best frozen yogurt in Orlando, look no further! This guide has all the best ice cream shops in Orlando that offer delicious frozen custard an

407 Day in Orlando falls on April 7th every year and this holiday showcases all the most unique activities, local things to do, and the best

With so much going in the 407 area for Easter in Orlando, you may not know which activities or events to participate in. From Easter to several food festivals, there are plenty of fun things to do in Orlando...

Best Places To Stay in Orlando For St. Patrick's Day

St. Patrick's Day in Orlando has no shortage of fun but you may be in a pickle when it comes to finding a place to stay. These hotels and

Where To Watch The National College Football Championship in Orlando

For those looking for where to watch the college national football championship game in Orlando, this guide is here to help. With several Orlando sports bars and

The most anticipated holiday of the year is here and it is time to celebrate! Christmas in Orlando will showcase several events and

Where To Get a Tan in Orlando

Oktoberfest in Orlando is a time to celebrate all the unique German cultures with all your friends and family. Thes German restaurants in Orlando are the perfect place to get t

For those looking where to go running in Orlando, there are several trails, parks, and wilderness preserves to choose from. These are the best hiki

8 Restaurants You Must Order Delivery From in Orlando

For some of the best food in the 407, these restaurants in Orlando make eating at home feel like fine dining. These 8 de

Unique Things To Do in Orlando

If you want to try something new in the 407 area, what are some unique things to do in Orlando for locals and tourists alike? For anyone looking to check off some items on a buc

Have the urge to do something fun and exciting outdoors? With several attractions in Orlando, which can you count on to allow you to socially distance yourself and see s

Latin and Spanish Restaurants in Orlando With Takeout

Fiending for some local Spanish cuisine? These Latin restaurants in Orlando offer scrumptious menu items to take on the go.

If you are looking for places to eat in Orlando on a budget, this 407area guide is here to help. With all the best cheap eats in Orlando, this guide is a great way to save

Outdoor Places To Eat in Orlando

Restaurants in Orlando are as diverse as the city itself. What most locals know is the best Orlando restaurants are ones you can enjoy outdoors and with a cool beverage. T

The Magic City is known for its beautiful weather and Orlando attractions, but what about when it rains? On average the amount of annual rainfall in Orlando is a wh

Epcot International Festival Of The Arts

If you're looking for a completely family-friendly event or one that's perfect for a romantic afternoon with your loved one, look no further! The annual

With Valentine's Day right around the corner, you might be looking for the perfect way to celebrate. Orlando is home to amusement parks, restaurants and exciting nightlife. If a fine dining expe

Thursday was the day when the most-anticipated Star Wars: Rise of the Resistance ride finally opened at Disney'

Book These Festive Orlando Hotels For A Happy Holiday

If you can't be with the ones you love this holiday season, or you're avoiding them at all cost we found a few Orlando hotels offering Christmas cheer with your ch

Epcot International Festival of the Holidays

Planning a trip to Orlando? Check out this list of where to stay with Black Friday hotel deals in Orlando. There are hundreds of

Planning on spending Thanksgiving in Orlando? There are plenty of places to eat in and around the most magical place on earth. Here is a list of

Things To Do in Orlando This Weekend | August 29th - September 1st

You've been working hard all week to make it to the long weekend, so why not celebrate by enjoying some of the hottest events in Orlando the weekend has to offer! This